Port Hardy is located on the Northern tip of Vancouver Island, in Canada’s most westerly province of British Columbia. The population of Port Hardy is approx 4500 people, with the main industries being aquaculture, logging, fishing and mining. Facing the cold, clean and productive waters of Queen Charlotte Strait, Port Hardy has always held a close relationship with the sea and is considered “Paradise” by those who love the outdoors.

Port Hardy SunsetPort Hardy is the most populated settlement on northern Vancouver Island, and is flanked by the smaller communities of Port McNeill, Coal Harbour, Port Alice, Holberg and Winter Harbour.

Vancouver Island Fishing ChartersThe Port Hardy area was settled around 1900, and the first post office and store arrived shortly after in 1904. Although the local environment provided limitless amounts of seafood and venison, times were tough, and the local population grew very slowly due to the extreme isolation.

Gradually, the local population grew to such levels that the Hudson’s Bay Company eventually established a store in what is now known as Fort Rupert, and regular trade routes were established, linking Northern Vancouver Island with the rest of Canada.

Enticing advertisements promising a prosperous port town, complete with rail yards and grain elevators, drew settlers from the United States and England, but when they arrived they found dense green forests and black rock, in place of the farms and conveniences they had been promised. Many packed up and left, but others had invested everything they had to make the move.

These people remained and by 1914, 12 families had settled, built a school, sawmill, church and hotel. By 1916, a trail connected Port Hardy to Coal Harbour and the community was on its way to becoming the central North Island supply centre it is now.

Archaeological studies have shown that this area was home to First Nations people up to 8000 years ago. Today, the Port hardy area is home to the Quatsino, Gwasala and Fort Rupert bands. Fort Rupert is just north-west of the Port Hardy Airport off Beaver Harbour Road. Aboriginal culture has flourished on Northern Vancouver Island for thousands of years.

“Although Beaver Harbour is so rich in legends, it is strange that in 1835 there was very little permanent Indian settlement here. The present area of Fort Rupert village was the site of an enormous bank of clamshells, two miles long, half a mile wide and fifty feet high. The shells were the last vestiges of enormous feasts held here for generations and they came to play a part in local history in World War II when they were used to level the airport nearby.”

– Landmarks and Legends of the North Island by Philip Stooke, published in 1978 by North Island Gazette.
(Pt Hardy Chamber of Commerce) 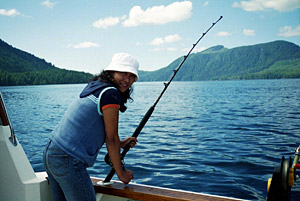 How to Get here

We can be reached by following Highway 19 north from Campbell river (approx 2.5 hrs).

You can also fly directly to Port Hardy from the Vancouver International Airport, via daily scheduled flights offered by Pacific Coastal Airlines (1-800-663-2872).

Pickup can be arranged in Campbell River and Comox, and car rental is available at all airports! If you need assistance or advice with your travel plans, give us a call, we would be glad to help!