Stories From Our Fishing Trips

I received a call in early 2009 from a gentleman in Seattle named “Phillip” . He was inquiring about a salmon fishing trip to Vancouver Island for an elderly friend of his named “Morry”.Phillip explained to me that Morry was an avid fisherman who had fished salmon for a long time. He also explained to me that Morry preferred to fish salmon by using a cut – plugged herring! This caught my interest immediately, as I am an avid “cut-plugger”, and have always enjoyed fighting a large Chinook Salmon without the resistance of a flasher! I was very interested in getting a chance to meet Morry as I knew he would be a wealth of information regarding Salmon Fishing tactics, and perhaps offer some historical insight. After conferring with Morry, Phillip called me back to let me know that the trip was a go, and that Morry would be flying in from Seattle on a float plane for 5 days of Salmon Fishing on Vancouver Island.

July came quickly, and before I knew it Morry was waiting for me at the dock when I arrived with some good Chinooks from that days fishing. He appeared to be in his late 70’s, and with a discerning eye, quickly commented that our prized catch was “not bad”! I could see from the many “Tyee Pin’s” adorning the brim of his cap that he had caught his share of big King Salmon. I knew than that It would be tough to impress this well seasoned angler, and I must admit I was a bit nervous.

The next morning, Morry was waiting anxiously with his fishing rod’s in one hand, and his tackle in the other. Most clients like to use my gear, but I was anxious to see how he rigged up, and perhaps learn a thing or two. The weather man didn’t exactly cooperate, so we stayed a bit closer to home. I watched intently as he cut the first herring with a sharp knife he pulled from his tackle box. I noticed that he cut the head off at a slightly different angle than me, and also removed the vent to allow water to flow through the cavity. We began at one of my favourite holes in Hardy bay, and at first just fished Morry’s rod. He changed his mooching weight and checked his “roll” several times until he seemed content with his salmon fishing tackle.

I was concentrating on working the boat up tight against the kelp beds, when I heard a quiet voice from the back deck say “Fish On”! I looked back to see his rod doubled over, as a King Salmon was peeling line from his Shimano reel. Morry was the calm one, as I worked the boat out of the shallows into deeper water. He was slow and methodical, and to be honest, the fish had no chance against Morry’s salmon fishing experience. A couple of runs and a jump later, we had a respectable Vancouver Island King Salmon in the net. The fish was around the 17lb mark, and was a beautiful purple colored “feeder Chinook”. Considering that we had another 4 days to fish, we let it go and kept fishing. The fishing seemed to slow with the changing weather, but we did manage to hook a couple good fish and made a day of it. 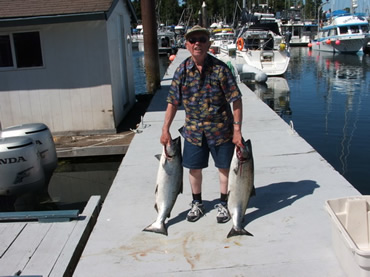 The weather improved a bit the next day, so I ran out into Queen Charlotte Strait for anhour to where I had previously had some good Vancouver Island Salmon Fishing. The spot was much more exposed than the previous days, and although the wind had died down, there was a good swell. We both struggled to stay on our feet, but eventually were able to get some good passes through the spot. It took about an hour until I heard Morry yell with a mouthful of porridge, “FISH ON”! I turned back in disbelief to see my rod motionless and Morry’s doubled over. This fish was much larger than the previous, and was really putting up a show. Unfortunately,I got too close to a free floating patch of kelp, and lost the Salmon. Morry said nothing, and wasted no time in tying on a new Salmon leader and cut plug herring. I quietly hung my head as I manoeuvred the boat back over the spot. Several passes later he again says in a quiet voice “Fish On”. This time there was no breaking off, and as me and Morry gelled as a team, we worked together to land the beautiful King Salmon. I slipped the net around a 30 lb Vancouver Island Chinook Salmon and was finally able to relax.Morry looked at me, tilted his polarized sunglasses and said ” nice fish kid, but the last one we lost was bigger”! I knew he was right, but was determined to make it up to him. A few more passes and we were both tagged out on respectable Chinook Salmon, plus the added bonus of a chicken Halibut that bit my herring. We were both exhausted from the relentless waves, but managed to stay awake for the long ride home. 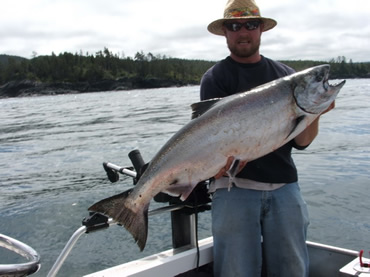 The next morning we were both feeling a bit groggy from the excellent salmon fishing we had enjoyed the previous day, but we knew we had to get back down to the hot spot. I could tell that the weather was even better than the day before, and we were both excited to get there and start trolling King Salmon. We trolled for about 45 min, and after a couple of hits and misses, we hooked our first Chinook Salmon of the day.

I had sped up to avoid another boat, when the fish bit. I was curious to know if this was a coincidence, or if the Salmon preferred a faster roll on this particular day? We landed the fish, and dropped the gear again. This time I set out an anchovy, and dialed up the speed to 3 knots. It didn’t take more than a minute and whammo, we had another King Salmon on the line.

This went against everything I had learned about salmon fishing. The lesson had always been to troll slow for Chinook Salmon, and Fast for Coho or Silver Salmon. We landed our second Spring salmon of the day, and immediately dropped the gear for another high speed pass. Two more passes and we both had our limit, It was 9am!! Well, we had come a long way, and obviously it was our day to shine, so we proceeded to start trolling again, and as soon as we hit 3 knots, we got bit, again and again and again. I am not sure why the salmon liked the bait presented so fast on this particular day, but we caught and released another 8 Chinook salmon before it was time to head home. The last fish of the day was a real specimen, and I would guess it was between 45-50lbs at the time of release. This was my best day of Chinook Salmon fishing ever! 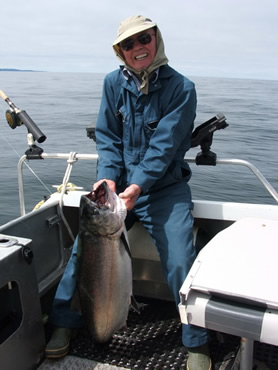 The last day of Morry’s salmon fishing trip we stayed close to home and out of the waves. We didn’t use the downriggers, and instead opted to just motor mooch along the kelp beds. Morry once again schooled me, and every other boat on the tack, as he hooked a salmon every 15 minutes or so. This was just a fun day for us both, the pressure was off, and we released everything we caught.

Morry commented on how great the trip had been, and despite his age, he hoped he would be healthy enough to make it next year. Thinking he was in his mid 70’s, I couldn’t help but ask his age. He lowered his polarized lenses, and with a grin said, “I just turned 94”. My jaw hit the floor, and I complimented him on his excellent shape. The next morning I watched my new friend fly back to Seattle with several coolers packed full of fish, the trip was a success.

A few months went by, when my wife informed me that I had a letter from Seattle. I was from Morry, wishing us a merry Christmas. His letter read as follows:

I hope all goes well for you two great friends. If you can put up with one old fisherman who is hard of hearing. The lord keep him going for another year. We could make a fishing trip for 2010? Last trip with you was one of my very best. As a fishing partner and skipper your the Best.

This brought a tear to our eyes, and we pray that he is able to come fishing again in his 95th year. Thanks for the lessons Morry, I learned more from 5 days of fishing with you than I had in the last 25 years.