Tides and Tales is owned by Mike Kelly of Port Hardy, BC. Mike is a professional fisherman who has fished extensively across Canada and the northern United States.

This confirmed “fish nut” developed his skills on the fabled Bow river near Calgary, fishing for large Rainbow and Brown Trout, and specializing in dry fly fishing after dark since “that’s when the big ones feed. Mike has also fly fished for Salmon, Rockfish, small mouth and largemouth bass, panfish, catfish, Northern Pike, whitefish, Arctic Char, Bull Char, Brook Char, Steelhead and Cutthroat trout – all with a fly rod!

After studying Environmental Science at Lethbridge Community College, and Fisheries Biology at the University of Northern British Columbia, Mike made his way to Port Hardy located on Vancouver Island, where he pursued a career in marine research. After several years, Mike joined the “dark side”, and became a commercial fisherman.

In 2003; with nearly 2500 sea days under his belt, Mike started Tides and Tales Sport Fishing Charters and Adventures, with his 21 foot Bayliner Trophy “Atta Boy”.

Currently Mike is consumed with catching big Chinook, Halibut, Albacore Tuna and Shark in the waters around Port Hardy, Vancouver Island, British Columbia. So there are Tales to Tell when you go fishing with us. If catching “size extra large” appeals to you, look no further than Tides & Tales, located out of Port Hardy on beautiful northern Vancouver Island.

We have everything it takes to deliver to you the fishing trip of a lifetime! But it’s good to check a 7 day Tidal Chart Prediction to know the best time of day.

With access to some of the richest fishing grounds in the Pacific, our clients always catch fish! From the elusive Chinook salmon that hits like a freight train, to the hard fighting Coho salmon, we know where the big ones live.

If monster halibut, lingcod and red snapper are your passion, we know where they hang out too.

Whatever your Canadian Pacific fishing fantasy is, let Mike create it with you today! 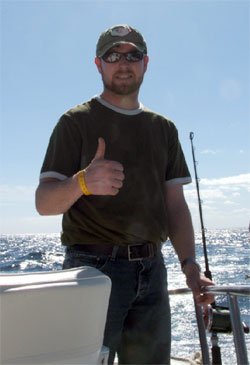